Where do space objects crash when they make a re-entry into Earth’s atmosphere? A location far away from land exists. Read on to learn more about Point Nemo.

How far must you travel to get away from all the land on the Earth? 100 miles? 1000 miles? Located 1,450 nautical miles from land, a spot located in the Pacific Ocean boasts the nickname, Point Nemo. Aptly named from Jules Verne’s character Captain Nemo, the translation of Nemo means “no one”. In this case, the spot is nowhere near land.

Discovered in 1992, Point Nemo remains the most remote area of the ocean. How did researchers determine this area as the one farthest from land? Using three points of reference, they deemed this spot in the Pacific Ocean as the only place distant enough from landmass. They used Ducie Island, a remote atoll located in the Pitcairn Island Chain, Easter of Mota Nui, and Antarctica’s Maher Island. What happens in this part of the Pacific Ocean? Not much.

Due to the lack of ocean currents that move life through the area, the area sits in solitude. The ocean floor offers nothing in the way of a food source, so animals do not congregate in this area. Since land and humans remain so far away, it is quite interesting that the International Space Station comes close to this area on its orbit around the Earth. 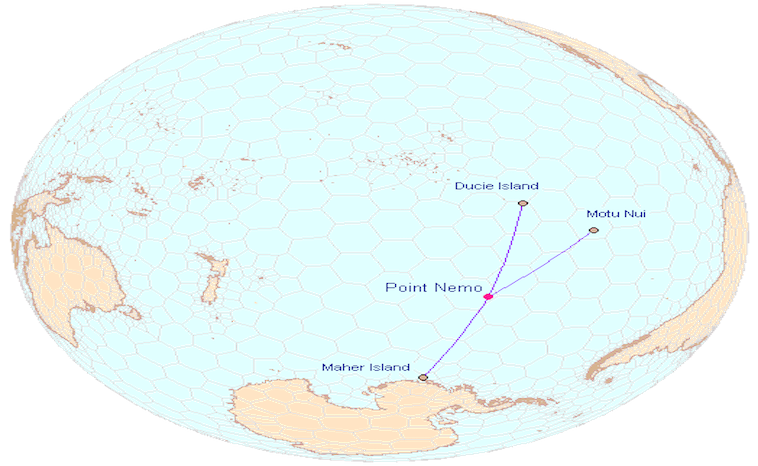 Governments have added items to the area. Hundreds of decommissioned space vessels have been steered to this area. Countries such as the Soviet Union/Russia, Europe, and Japan have sent many spacecraft to their watery graves. Presently, scientists believe close to three hundred items sit at this location.

Why have scientists chosen this area? When a spacecraft re-enters Earth’s atmosphere, it begins to burn. This burning causes the craft to break apart after violent contact with the atmosphere. Consequently, the fiery debris spreads over an unpredictable large area. Scientists want to ensure that humans do not die from the burning debris and try to guide it.

A Safe Place to Land

Even though Point Nemo is far from any landmass, the government in charge of the re-entry craft must notify the countries of Chile and New Zealand. If the craft somehow misses the target, these countries have the potential of having the debris hit their land. This also allows pilots and sailors to look for debris that may have flown off course. Normal shipping lanes and aviation corridors do not go near Point Nemo, but this remains a precaution.

“The massive, 420-tonne ISS also has a rendezvous with destiny at Point Nemo, in 2024. In the future, most spacecraft will be “designed for demise” with materials that melt at lower temperatures, making them far less likely to survive re-entry and hit Earth’s surface. Both NASA and the ESA, for example, are switching from titanium to aluminum in the manufacture of fuel tanks.” (Phys.org)

It will be interesting to see what will happen when China’s Tiangong-1 makes re-entry this weekend, April 1st, 2018. Will it hit Point Nemo? We will have to wait and see.