Alpha Cephei is also called Alderamin which translates from Arabic to English as “the right arm” referring to its placement in the constellation of Cepheus, “the King.” Due to its position in the night sky, in about 5,500 years it will be an exact pole star. This star is a fast-rotator completing an orbit every 12 hours!

Alpha Cephei (Alderamin) is located in the constellation of Cepheus and lies approximately 49 light-years in distance. Since this star lies very close to the precessional path of the north celestial pole, it on occasion comes within 3 degrees of becoming an exact pole star. The last time Alpha Cephei was in this position was in the year 18,000 B.C. and it will do so again in about 5,500 years.

Star gazers do not need any fancy equipment to view Alderamin, as it is visible to the unaided eye – just look northward for a child-like stick house figure in the night sky – Alpha Cephei is the brightest star in this configuration. If you live in Europe, northern Asia, Canada and in the United States as far south as San Diego, this star will be clearly viewed even with the interference of the city lights. 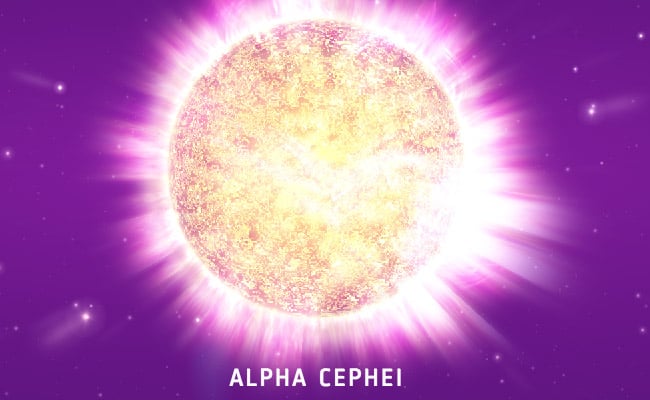 Alpha Cephei is white class-A star that is evolving from a main sequence into a subgiant. In addition, astronomers believe this star is also in the process of evolving into a red giant as its hydrogen fuel is burning up. Alderamin is also a fast spinner (246 kilometers/second or 152 miles/second) completing a full rotation every 12 hours (the Sun completes a rotation about every 30 days). This star is also an anomaly. Despite its fast rotation it still shows signs of large amounts of x-rays and magnetic activity.

This star is the brightest one in the constellation of Cepheus and shines with the intensity of 18 Suns. With a mass of 1.74 times the Sun and a radius of 2.3 times our Sun, this star burns at a surface temperature of 7,740 Kelvins (13,472 degrees Fahrenheit or 7,466 degrees Celsius) giving it a visual magnitude of 2.45.

In the 2nd century, Greek astronomer, Ptolemy, catalogued this star along with 88 constellations we know today. In Greek mythology, Alpha Cephei represents the right arm of the king of Ethiopia, Cepheus who was also Cassiopeia’s husband. As legend has it, the couple had to sacrifice their daughter (Andromeda) to a sea monster for punishment of Cassiopeia’s vanity. However, she was rescued by Perseus before the beast could claim her.

Alpha Cephei is not just another twinkling celestial object, it has some cold hard facts and true significance. So if you have a chance to view the brightest star in the Cepheus constellation be sure to take a look at one of the most intriguing views you may ever experience.

Fly to Alpha Cephei in 3D!