Currently, ‘Voyagers’ are at over 130 resp. 156 AJ from home. If we had thermometers, what temperature do you think they would show?

Distant space probes like ‘Voyager’ have been traveling for decades through an environment that represents an almost perfect vacuum. There are some particles in it: stray atoms (mostly hydrogen), charged solar wind particles, charged particles from the interstellar medium, etc. But these are so few that any heat energy exchanged with these particles by conduction or convection will be absolutely negligible.

So, it doesn’t really matter if the solar wind has a temperature of 1 degree Kelvin or a million degrees or even has any temperature – it will not significantly affect the temperature of the probe. The flow of particles at such a high speed is not necessarily in a state that can reasonably be described by temperature.

The probes also receive light (heat) from the distant Sun, some of which they absorb. Both the heat generated by nuclear generators and the probe electronics themselves radiate into deep space.

The math is actually pretty simple. If one probe is as far from the Sun as the Earth, it would get about 1,370 watts of solar heating per square meter. This number is called the solar constant in some literature.

But ‘Voyager 1’ is over 156 times farther from Earth, and the intensity of the Sun’s heat is proportional to the inverse square of the distance. Thus, Voyager 1 receives only about 56 milliwatts of heat per square meter from the Sun.

If the ‘Voyager 1’ was a so-called thermodynamic black body, it would measure a temperature of about 23 Kelvin degrees at 156 AJ from the Sun. But that doesn’t mean it’s the temperature of the interplanetary / interstellar medium at that place.

Remember, heat conduction and heat convection are not that important in an environment that is an incredibly better vacuum than any we could create. This is just the equilibrium temperature of the spacecraft itself. 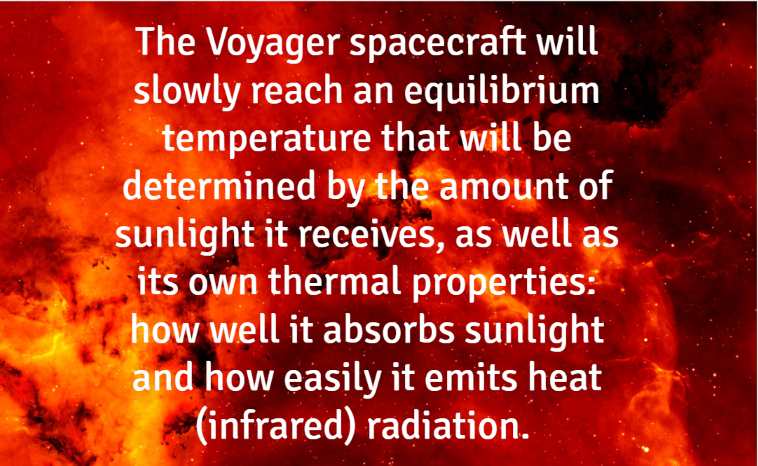 More precisely, it would be the equilibrium temperature of a dead spacecraft. But ‘Voyager 1’ isn’t quite dead yet. There is a source of energy on board: a radioisotope thermoelectric generator (MHW-RTG) that produces kilowatts of waste heat, and even now about a few hundred watts of electricity.

Most of that electricity is used to power the spacecraft subsystem and is eventually converted into heat. So, there is a lot of excess heat on board, regardless of the small amount of solar heating that the aircraft is constantly receiving.

So, its interior is still at a decent temperature, well within the margins of the working specification. And it will stay that way until the flight is turned off, until its power is used up. Even then, there will be residual heating from nuclear fuel in generators.

When that disappears, centuries from now, the spacecraft will slowly reach an equilibrium temperature.

These characteristics are, in fact, part of the aircraft’s specifications and were used in engineering calculations when designing the aircraft, and especially its thermal management.

At the time of the launch, the Voyager RTG was delivering about 470 W of electricity. Plutonium fuel has a half-life of about 87.8 years, so today only about 70.38% of plutonium-238 remains.

In the year 2050, it will be at 56.5%, which is below the amount that is minimally needed for transmitter operation. It is estimated that about 0.8% of the cost is lost each year.

In order to save electricity, in 2011 NASA turned off the heater of the ultraviolet spectrometer on the probe. It was designed to work at the lowest temperature of -35ºC, but after turning off the heater, it continued to work at -79ºC.

Engineers think that it continued to work, but the temperature detector can’t measure below that. Today the spectrometer is off.