Proxima Centauri is also known as Alpha Centauri C. and was discovered in 1915 by a Scottish-South African astronomer by the name of Robert Innes. This star is a red dwarf that forms a visual double with Alpha Centauri AB. Proxima Centauri has about 12.3 percent the mass of the Sun and may also experience sudden bursts of brightness. Recently the discovery of the potentially Earth-like planet Proxima b was announced.

This star is located 4.24 light-years from the Sun in the constellation of Centaurus. This constellation is the ninth largest in size (out of the 88) and contains 11 stars with known planets, but it does not have any deep space objects. It occupies about 1,060 square degrees in the night sky and belongs to the Hercules family of constellations.

Proxima Centauri can be seen in its home constellation located in the third quadrant of the Southern hemisphere, specifically between latitudes of +25 and -90 degrees. However, because this star is so dim it cannot be viewed with the naked eye. On August 24th 2016, the discovery of the potentially Earth-like planet Proxima b was announced. 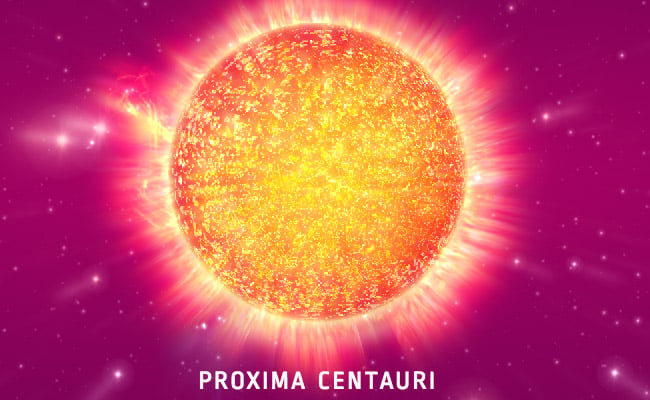 This star is a red dwarf that forms a visual double with Alpha Centauri A and Alpha Centauri B. Proxima Centauri is in the spectral class M5Ve or M5Vie, which means it could be a small main sequence star or a sub-dwarf – it could stay on the main sequence for approximately four trillion years! This star has about 12.3 percent the mass of the Sun. In addition, the interior of this star is known as convective meaning the ash left over from its thermonuclear fusion of hydrogen is circulating throughout the star rather than collecting at its core.

Proxima Centauri shines with an apparent magnitude of 11.05 and is also classified as an UV Ceti type flare star. This means it may have sudden bursts of brightness that can vary between 11.0 and 11.9 magnitudes.

Historically, Proxima Centauri was discovered in 1915 by a Scottish-South African astronomer by the name of Robert Innes. In Greek mythology, Centaurus (the Centaur) is depicted as half man, half horse and is thought to represent the mentor of Hercules, Chiron.

Proxima Centauri is not just another celestial object, it has some cold hard facts and true significance. So if you have a chance to view this fascinating star in the constellation of Centaurus, be sure to check it out.

Fly to Proxima Centauri in 3D!