Looking into the night sky we often look for constellations. Did you know that there appears a star cluster that shines bright like diamonds in the sky? Read on to learn more about the Pleiades star cluster.

The Pleiades, often known as the Seven Sisters, shine like a handful of jewels in the sky. This grouping of stars is prominent in the constellation Taurus. To find them, follow a line from Orion’s shoulder through Taurus’s bright star Aldebaran. This bright congregation of stars appears highest in the sky during the fall and winter.

An open cluster is a collection of 10 to 1000 stars in a region about 25 parsecs in diameter. The collection is bound weakly by gravity.  One parsec is equal to about 3.26 light-years (31 trillion km or 19 trillion miles) in length. Some open clusters are quite small and some are large, but they all have an open, transparent appearance because the stars are not crowded together. All the stars in a star cluster have the same age but differ in mass. 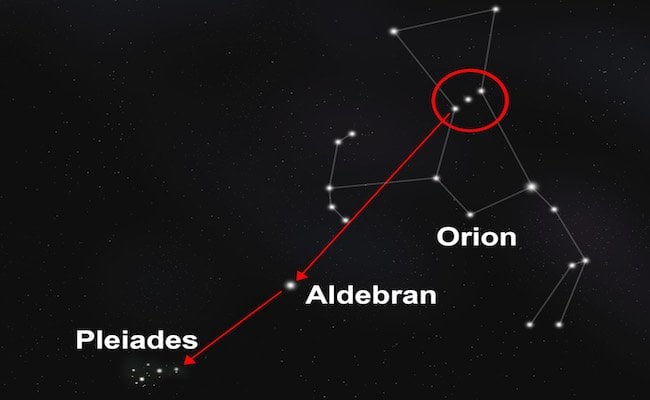 Look for the Pleiades in autumn and winter. In the Northern Hemisphere, the Pleiades star cluster becomes visible to evening observers in October and disappears in April. November is the best time to look for the Pleiades. They can be visible from dusk to dawn and reach their highest point in the sky.

The cluster actually holds about 500 stars. By and large, they are relatively young at about 100 million years old. Located 400 light years away, they may only hold together as a cluster for another 250 million years before separating. In the ancient Mediterranean world, the day that the Pleiades cluster first appeared in the morning sky before sunrise announced the opening of the navigation season.The modern-day festival of Halloween originates from an old Druid rite that coincided with the midnight culmination of the Pleiades cluster. It was believed that the veil dividing the living from the dead is at its thinnest when the Pleiades reaches its highest point in the sky – at midnight.

Shining beautifully in the night sky this star cluster may be viewed from both hemispheres with the naked eye. With a telescope in hand you will be able to view more in the star cluster, but overall the experience of seeing them together in the night sky will be quite rewarding.