Imagine for a moment that you lived in the year 1594. The telescope has not yet been invented. You believe that the Earth is the center of the universe. Then, a mathematician comes along and states that the sun is at the center of the universe. Would you believe this person? He also states that the moon controls the tides. What would you think? Read on to learn more about Johannes Kepler and his applied laws to planetary motion.

Johannes Kepler began life as a premature baby, plagued by smallpox, which affected his eyesight. He described both his parents as quarrelsome. As a young student he struggled in Latin, but later excelled in mathematics. Kepler went to the University of Tuebingen, a Protestant institution, where he studied mainly theology and philosophy, but also mathematics and astronomy. At the university, Kepler’s exceptional intellectual abilities became apparent. He greatly admired the astronomy professor Maestlin, who publicly taught the Ptolemaic scheme, but privately believed Copernicus. In 1594 he accepted the position of professor at a university in Austria. He enjoyed the study of astrology and complained that his work as a mathematician put him at odds with astrology’s faults.

His work came at a time when the scientific method and mathematics led to new discoveries by Galileo and Copernicus. Medieval theories regarding the Sun, Moon, and Earth went under great scrutiny. The Church forced imprisonment for scientists, astronomers, and mathematicians for views that contradicted Church teachings. Many of the discoveries of the time remained in secret for fear of public persecution.

Johannes believed in the Copernicus theory and worked out his 3 laws based on it.

Sometimes referred to as the law of ellipses – explains that planets are orbiting the sun in a path described as an ellipse.  An ellipse is a special curve in which the sum of the distances from every point on the curve to two other points is a constant. Kepler’s first law is rather simple – all planets orbit the sun in a path that resembles an ellipse, with the sun being located at one of the foci of that ellipse.

Kepler’s third law provides an accurate description of the period and distance for a planet’s orbits about the sun. His first and second laws describe the motion characteristics of a single planet. The third law makes a comparison between the motion characteristics of different planets. The comparison being made is that the ratio of the squares of the periods to the cubes of their average distances from the sun is the same for every one of the planets.

“For once I firmly believed that the motive force of a planet was a soul.”

What we are seeing here is a gradual emergence from medieval concepts. At first, Kepler thought the planets moved because they had souls-they were alive, magical, not just lumps of matter. Later, he realized a more mechanical approach was more appropriate. 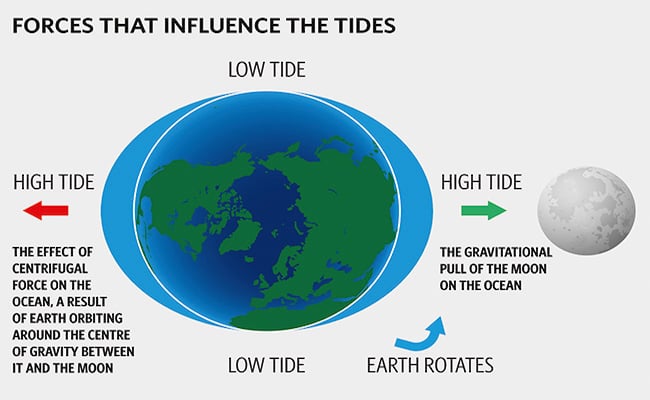 Effects of the Moon on the Ocean Tides

Johannes realized that gravity was the key to understanding the tides.  Waters of the oceans remained attracted by the moon’s gravitational pull. He wrote: “If the earth ceased to attract the waters of the sea, the seas would rise and flow into the moon… “If the attractive force of the moon reaches down to the earth, it follows that the attractive force of the earth, all the more, extends to the moon and even farther…”

Johannes Kepler’s laws regarding planetary motion led to further research and development in space science for hundreds of years. NASA recognized his great achievements and named a spacecraft after him. They also have an ongoing research division, named the KEPLER MISSION.