Many people are familiar with Stonehenge located in Wiltshire, England. What they may not know is that Stonehenge exists in Egypt and predates England by 1000 years. Read on to learn more about Egyptian Stonehenge.

With all of the amazing ancient structures, one would think that the Egyptians would have built several Stonehenge type observatories. Their knowledge of the stars and worship of the Sun encouraged great study regarding the astral arrangement of the pyramids. Today, scientists agree that in all of Egypt one Stonehenge type structure does indeed exist. The site is called Nabta Playa.

As herdsman traveled through the southernmost part of Egypt, they stopped along the basin area known today as Nabta Playa. People gathered there not only for water but for ceremonies as well. The basin area filled with water seasonally and allowed them to water their animals. Incidentally, evidence of people settling and raising cattle in the area come from artifacts indicating as much. 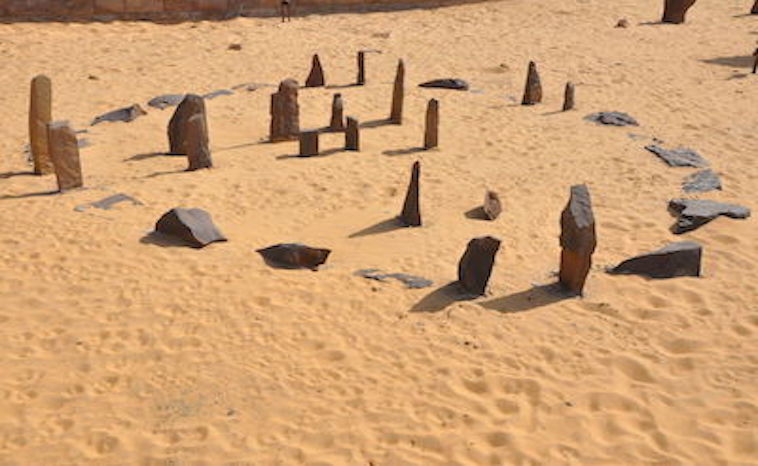 The megaliths, or large stones, found at Nabta Playa helped the people track the stars and seasons. Consequently, their lives formed around rituals and ceremonies that tied them to the night sky. Researchers believe that in the early years the people tracked the rising of Sirius. The monsoon rains fell on the desert basin and created a lake that reflected the starlight along the megaliths. Furthermore, they connected the rising of Sirius with the annual rains and could plan their crop cycles around this time. Eventually, the monsoon rains moved south and the people left the region and moved to the Nile Valley.

“Five megalithic alignments radiate outwards from a central collection of megalithic structures. The small stone circle contains four sets of upright slabs, two of the sets align in a north-south direction. The second pair of slabs provides a line of sight toward the summer solstice horizon. An east-west alignment exists between one megalithic structure and two stone megaliths, which stand about a mile apart. Furthermore, two other geometric lines involve about a dozen additional stone monuments that lead both north-east and south-east from the same megalith ”

The stone circle at Nabta is special in several ways.

Moving To the Nile River Valley

Around 3300 BCE, the Nabta Playa area became an uninhabitable and dry area. At the same time, one of the earliest known temples rose up out of the sands of Egypt. The temple of the goddess Satis had its axis aligned with the rising of Sirius. As the star’s position changed the people rebuilt the temple. Consequently, the temple was rebuilt several times over 3,000 years. The Ancient Egyptians marked their New Year by the reappearance at dawn of Sirius. The appearance meant that the Nile River would soon rise from the monsoon rains upstream and that the growing season would soon be upon them.

The people of the Nabta Playa built megaliths and held ceremonies constructed around the rising of Sirius and the monsoon rain season. The megaliths may represent the earliest space observatory on the Earth. With their knowledge and ritual, the people of the Nabta Playa went on to become one of the greatest civilizations in the Ancient World. An amazing feat determined by watching the stars and marking time.