On our planet, the Sun appears in the east, then it rises and when it reaches the highest point in the sky, it is noon. After that, the Sun descends towards the horizon and sets in the west. Then it’s evening. When the Sun rises again one day is completed.

We can also count the beginning of the day from the second position of the Sun in the sky, say from its highest position, as it used to be calculated (until 1925, when the International Astronomical Union decided that the day begins at midnight).

It’s different on Mercury. There the Sun appears and rises above the horizon, then stops slightly, moves back, and then moves forward again. And that’s not all.

Let’s explain it all. A year is the time period between two consecutive positions of a planet on its path around the Sun (i.e. when the planet completes its entire path around the star).

We need a point from which we will measure time. Let’s say we start from the perihelion, which is the point on the path of the planet around the Sun, where the planet is closest to the Sun.

When Mercury goes around its entire path around the Sun and comes to perihelion again, one Mercury year is completed. During that time, 88 days have passed on Earth. So, one year on Mercury lasts 88 Earth days.

Mercury, like the other planets, also rotates around its axis.

When it turns 360 degrees, it makes one rotation. Imagine that you are observing a distant star from Mercury through a stationary, fixed telescope. The telescope is aimed at that star, but as Mercury rotates, the star soon leaves the telescope’s field of view.

However, after some time Mercury will make a complete rotation, it will turn for a full 360 degrees and our telescope will again “hit” the star that we observed at the beginning. So, Mercury turned once around its axis, made one rotation.

During that time, 58.6 days have passed on our planet, Earth.

We measure the day from one position of the Sun in the sky to the next position. Now we are observing the movement in relation to the Sun. Let our telescope be pointed towards the Sun at the beginning of the measurement.

Look at the drawing. Notice that Mercury moves around the Sun and at the same time around its axis. 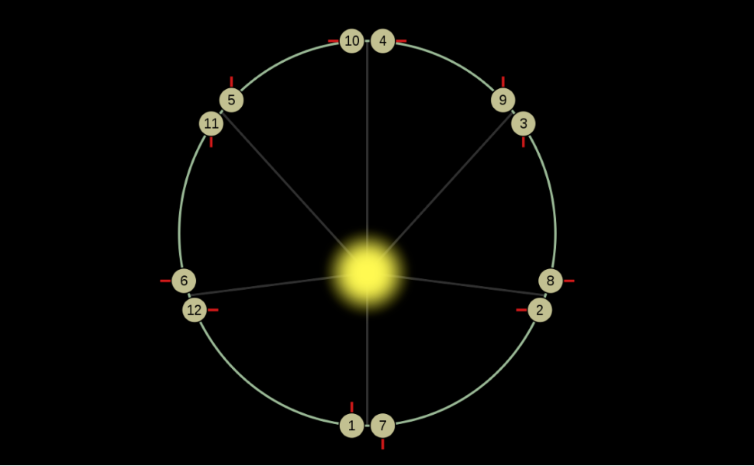 We start from position 1. Mercury continues through points 2, 3, 4 and arrives at point 5.

So, one Mercury year has not yet been completed!

When Mercury arrives, after point 6 to point 7, the year on Mercury has ended, but our telescope does not yet show the Sun – but is directed to the opposite side. For the observer by the telescope, it is then midnight.

At this point, only half of Mercury’s day has passed – and one entire Mercury year.

It will, in fact, take one more full rotation for the telescope to arrive at the start point 1, pointing at the Sun.

This means that one day has passed on Mercury, but at the same time Mercury completed its path around the Sun twice, during that time it turned around its axis three times, and 176 days passed on Earth.