Do you have a black shirt? Have you ever seen black asphalt? These items appear black because they absorb all the colors. Scientists have found a black planet. Read on to learn more about WASP-12B the black Exoplanet.

1400 light years away an exoplanet named WASP-12B orbits a Sun-like star name WASP-12A. Discovered in 2008 this exoplanet has become one of the most studied due to the fact it appears black. 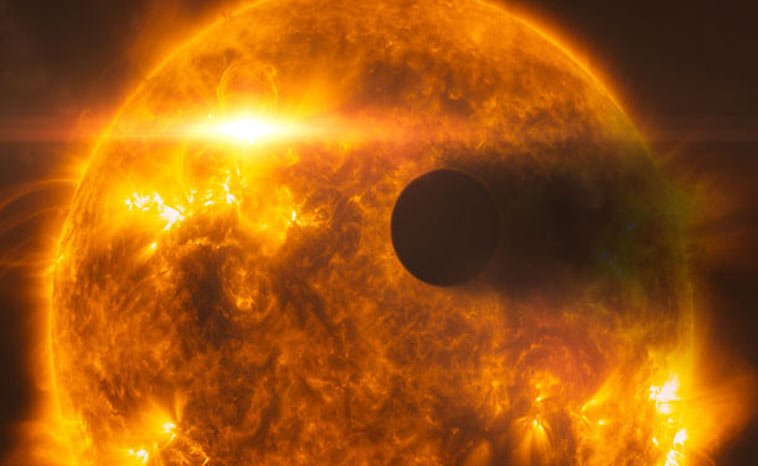 When NASA’s Hubble Space Telescope observed the planet it found that it appeared black. Presumably, they believe that absorbs light rather than reflecting it back into space. The planet traps 94 percent of the visible starlight falling into its atmosphere.

“We did not expect to find such a dark exoplanet,” said Taylor Bell of McGill University and the Institute for Research on Exoplanets in Montreal, Quebec, Canada, lead researcher of the Hubble study. “Most hot Jupiters reflect about 40 percent of starlight.”

The hot atmosphere prevents molecules from surviving the day side of the planet when temperatures reach 4,600 degrees Fahrenheit. Consequently, the clouds cannot form to reflect light back into space. Furthermore, the incoming light goes deep into the atmosphere where hydrogen atoms absorb it and convert it to heat energy.

But the planet’s nighttime side is a different story. WASP-12b has a fixed day side and night side because it orbits so close to the star that it is tidally locked. The nighttime side is more than 2,000 degrees Fahrenheit cooler, which allows water vapor and clouds to form. Previous Hubble observations of the day/night boundary detected evidence of water vapor and possibly clouds and hazes in the atmosphere. WASP-12b is about 2 million miles away from its star and completes an orbit once a day.

Taylor Bell, a Master’s student in astronomy at McGill University who is affiliated with the Institute for Research on Exoplanets: “The measured albedo of WASP-12b is 0.064 at most. This is an extremely low value, making the planet darker than fresh asphalt!” This makes WASP-12b two times less reflective than our Moon which has an albedo of 0.12. Bell adds: “The low albedo shows we still have a lot to learn about WASP-12b and other similar exoplanets.”

The researchers determined the planet’s darkness by using Hubble’s Space Telescope Imaging Spectrograph. They looked for the most visible light and for a tiny dip in starlight as the planet passed directly behind the star. As a result, the amount of dimming tells astronomers how much reflected light was given off by the planet. However, the observations did not detect reflected light, meaning that the daytime side of the planet is absorbing almost all the starlight falling onto it.

What scientists do not know is why there are differences in similar exoplanets and their reflecting capabilities. As they gather more evidence and find new ways to look at these planets, they may find better explanations. We will continue to follow the research regarding these gas giants and hope to learn why some of them absorb and why others do not.