It’s been just over a year since the Dawn spacecraft slipped int orbit around Ceres, the largest object in the asteroid belt between Mars and Jupiter. Since March 6th, 2015, Dawn has sent back some exciting data, including images of a mountain on this dwarf planet.

“Ceres has defied our expectations and surprised us in many ways, thanks to a year’s worth of data from Dawn. We are hard at work on the mysteries the spacecraft has presented to us.”

Perhaps the most exciting find so far is the mountain the research team has named, Ahuna Mons. Before Dawn was captured into the orbit of Ceres, this mountain appeared as early as February 2015, but only as a small bright-sided bump on the surface of the dwarf planet at a distance of 29,000 miles (46,000 kilometers).  However, as Dawn circled Ceres at increasingly lower altitudes, the shape of this mysterious feature began to come into focus and is now best described as a dome with smooth, steep walls, not pyramid-shaped as they first expected it to be. 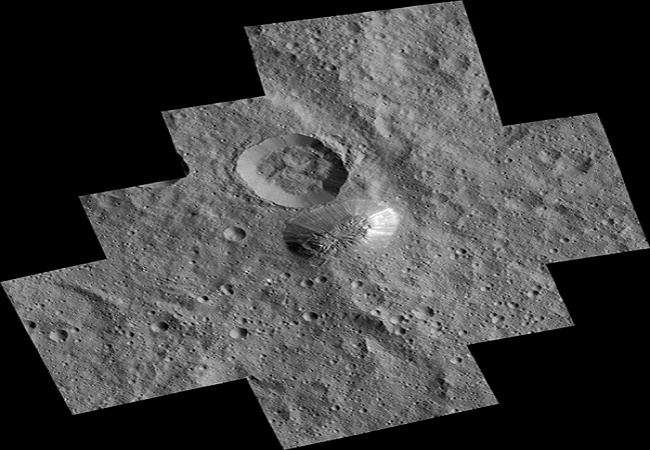 The mysterious mountain Ahuna Mons is seen in this mosaic of images from NASA’s Dawn spacecraft. Dawn took these images from its lowest-altitude orbit.
Photo Credit; NASA

The latest images taken by Dawn are 120 times closer than last years and reveals a stunningly amount of bright material (more so on some of the slopes). It also reveals the steepest side of Ahuna Mons is about 3 miles (5 kilometers), with an overall height of 2.5 miles (4 kilometers)–that’s higher than Washington’s Mount Rainier and California’s Mount Whitney!

“No one expected a mountain on Ceres, especially one like Ahuna Mons,” said Chris Russell from the University of California, Los Angeles. “We still do not have a satisfactory model to explain how it formed.”

Other objects on Ceres are now being discovered, but nothing as tall or well-defined as Ahuna Mons.

Before Dawn’s mission, the Hubble Space Telescope was able to pick up bright patches on the surface of Ceres. Since the spacecraft’s arrival, two “spots” have now become clear with high reflectivity and about 420 miles (670 kilometers) northwest of Ahuna Mons lies the now-famous Occator Crater. In this crater, there lies at least 10 of these bright spots, with the brightest one being in the midst of Occator itself.  However, it is not yet clear whether this bright material is the same as the material found on Ahuna Mons.

“Dawn began mapping Ceres at its lowest altitude in December, but it wasn’t until very recently that its orbital path allowed it to view Occator’s brightest area. This dwarf planet is very large, and it takes a great many orbital revolutions before all of it comes into view of Dawn’s camera and other sensors,” said Marc Rayman from JPL.

When it arrived at Ceres on March 6, 2015, Dawn made history as the first mission to reach a dwarf planet and the first to orbit two distinct extraterrestrial targets. What does Ceres hold for the scientific community? Time will only tell, so stay tuned for more exciting news from this dwarf planet.