As the years in our known history progressed, more interest and rivalry arose among scientists about the origin and date of birth of planet Earth. You’ll surely find the findings below curious, to say the least.

Henri’s family recorded four generations of scientists in a row. He accidentally discovered radioactivity when he realized that the phosphorescent mineral potassium uranyl sulfate had left a mark on the photographic plate even though it was well wrapped in black, opaque paper.

After several experiments, he realized that the mineral emits some invisible rays. It was a significant discovery, so much so that in 1903 he received the Nobel Prize (along with Pierre and Marie Curie) for, as it was stated, “extraordinary merits he made by discovering radioactivity”.

Radioactivity is a spontaneous process in which an atomic nucleus, releasing one or more particles, transforms into another, new and different from the parent nucleus.

What is important for us at this moment is that energy is released in this process! It is this energy that warms the Sun and prolongs its life far beyond the limits calculated by Kelvin and other 19th century scientists.

This is because the Sun does not burn its fuel in the usual way. In it, due to high pressure and high temperature, hydrogen atoms become helium atoms, releasing energy along the way. It is a long process.

Ernest was an unusual scientist from New Zealand, and this is why he enters the story of the age of the Earth in this place. Even before his birth, Ernest’s parents emigrated from Scotland to New Zealand, where they dedicated themselves to agriculture.

But when he grew up, Ernest chose science instead of the farm and, to cut a long story short, his career as a scientist was dizzying. He became a professor and taught in Cambridge, then in Montreal, then in Manchester, then he was the director of the famous Cavendish Laboratory.

Afterwards he became a member, then the president of the Royal Society, etc. and in 1908 he was awarded the Nobel Prize in Chemistry. Although a good theorist, he was above all an excellent experimenter. He had a special attitude towards experiments: he claimed that they work better if he curses them.

Rutherford, among other things, dealt with the problem of radioactive decay. At this moment, we are interested in only one detail from his work. With his colleague Frederick Sodi, Rutherford discovered and introduced the term “half-life” into science.

Let’s look at the math

The half-life will prove to be a convenient clock for huge periods of time. If you know what percentage of the atoms of an element in a sample have already disintegrated, you can calculate how much time has passed since the formation of that sample.

For example, you have a lump of rock that contains a mineral with a radioactive element whose half-life is one year. In one year, it will clear exactly half of the radioactive atoms (i.e., it will turn into another type of atom). Half of the remaining half will fall apart again in a year (i.e., 25% of the initial amount) and so on. Once you determine what percentage of the total number of atoms decayed, you can calculate when the decay began at all, i.e.. how old the rock is.

Of course, this is an extremely, extremely simplified presentation of measuring the age of a rock using a half-life. In reality, all this is much more complicated and is described in thick books, because there are many side paths in this account that lead you directly to the wrong conclusion.

First of all, there are no school examples of rocks in nature in which there is a convenient number of unstable atoms. In addition, you should know that one radioactive element decomposes into another, which then decomposes into a third, this into a fourth, and so on, which all need to be nicely measured and calculated. 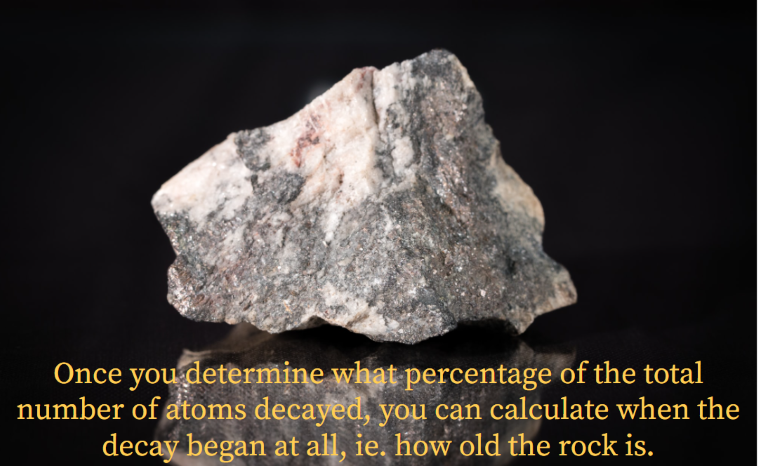 What percentage of one parent element has disintegrated, you conclude by how many of his daughters there are, that is how many new elements. All this makes calculating the age of the rocks complex and complicated.

Admittedly, that’s what it looks like to us mortals. There are those who think that mathematics that leads to a reliable result about the age of a rock is not difficult at all and that everyone can understand it.

The age of the rocks based on the half-life idea caused, as might be expected, great disbelief. We did some research on that as well, so check out the rest of our blog for more fascinating information on this idea.

Did you know that here at OSR you can name stars? International Women’s Day 2022 is just around the corner, so get your special gift now by clicking on the link below!